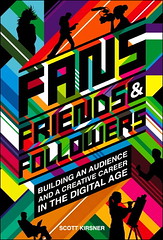 From Kyle Bylin: Today, I spoke with Scott Kirsner, author of Fans, Friends and Followers: Building an Audience and a Creative Career in the Digital Age.  Scott shares his perspective on active consumers, why some fans still want to be passive, and the greatest lesson he learned in writing the book.

What degree of disparity, and, yet, in the same breath, newfound hope and empo-werment do you believe up-and-coming musicians, artists, writers, and the latter can find within that great paradox of our times?

Scott Kirsner: I tend to be optimistic, so I think there’s a lot of hope for up-and-coming artists to find a way to build their own fan base and earn a living. There are incredible shifts happening in the worlds of music, film, and publishing – and individual creators can be much more nimble when it comes to understanding them and taking advantage of them than big mega-media corporations.

Tell me about the changes in areas of our lives that have combined to alter the artistic and creative pursuit for meaning, for support, and freedom.  And, have these changes given birth to a new type of artist?

Scott Kirsner: The biggest change is how much time we are spending online, whether it’s on a computer at home or at work, or on a handheld device like an iPhone. That shift of attention from all sorts of other media is creating a new distribution channel, a new creative platform, that smart artists will use to tell new kinds of stories, invent new forms, pioneer new genres. All of the pre-Internet media were centrally controlled, and not nearly as open to individuals with a new vision.

One of the great accomplishments of your book is how you managed to humanize the success stories of these individuals.

During the writing and upon completion of your book—did you begin to feel that that too—that these were stories of regular people, making their way through the world, loving what they did, and supporting themselves on top of that?

Scott Kirsner: Absolutely. I think the primary goal of most artists is to figure out a way to make a living without needing a day job. That’s really the first step, before you get to global fame and fortune. And I think that being human and “regular” and authentic is really important in this new digital world – people want to connect with you as an individual. We’re moving away from the plastic, mass-manufactured artistic personae of the past.

You highlight a characteristic of audiences in the digital age that is often times missed, that despite the great advances in our culture, many still want to be passive consumers.  Why do you think that is? Do think that active consumers of content are the more likely understand the process and support the art they love?

Scott Kirsner:  You make a great point – not everyone wants to be a content creator. But I think that one important change is that lots of formerly passive consumers want to participate in the creative process, or engage with the artist, in ways they couldn’t before. That’s a new kind of relationship between artist and fan. And of course, some people will still just be passive consumers, and will just visit your Web site and maybe buy your music or your merchandise.

Susan Strasser writes in Waste and Want, “Formally customers, purchasing the wherewithal for daily life from craftspeople and storekeepers whom they knew, Americans became consumers, buying and using mass-produced goods as participates in a complex network of distribution that an individuals’ relationship with big, centrally organized, national-level companies.”

In a way—has this portion of these active consumers actually gone back to this model of becoming customers, instead of consumers, where they are more inclined to buy cultural objects from people they know—through which they can exchange value with a real person, rather than that of corporations and brands?

Scott Kirsner: I do think that is attractive for lots of people – being able to have a link to a person, and feel like a patron of the arts. Saying to your friends “this musician I know” is such a different thing from saying “this musician I like.”

Why do you think it’s important that we begin to start the conversation and make decisions about the future of music, movies, and books as culture, our culture, rather than only viewing them through the lens of being products?

Scott Kirsner: Well, I think everything artists make contributes (even in a small way) to the culture. But most of it also has to be a product, too – sold to an audience member, or supported by some kind of underwriter/sponsor.

Having created such a great opportunity to sit down and talk to such a wide variety of creators and artists alike, what’s the greatest lesson or insight that you came across while putting a book like this together?

Scott Kirsner: Probably the insight that good artists also need to develop entrepreneurial abilities – or bring someone onto their team who thinks like an entrepreneur, and isn’t afraid of new technology.

What was one of the best scenarios you came across where a creator not only made it easy for fans to contribute and help further their art, but where they genuinely made it so that fans felt great about the investment they made?

Scott Kirsner:  I like the example of the band OK Go encouraging fans to make their own dance videos, and then promoting all of the videos that got made – and inviting the makers of the best one to perform with them onstage at a show. It felt like it was taking music videos, typically funded by record labels and intended to sell more units, to a new place.