Interview: Kevin Maney of Trade-Off: Why Some Things Catch On, and Others Don’t 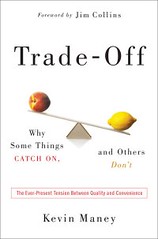 Recently, I spoke with Kevin Maney, who is a widely respected technology writer and author of Trade-Off: Why Some Things Catch On, and Others Don't.  In this interview, Kevin talks about the lack of aura in digital music, the hedgehog concept, and how live music establishes indentity.

To start this off could you briefly outline how music fans, in their everyday lives, make trade-offs between the fidelity an experience and its convenience?

Kevin Maney: There are two extremes to enjoying music. The high fidelity end would be going to a big-time concert like U2 or Lady Gaga. It’s an amazing experience and people will pay a lot to go and put up with terrible inconveniences like crowds and parking – but we’ll give up convenience for that level of fidelity.

The high convenience end would be MP3 music files. The fidelity isn’t that good, but you’ll give up fidelity for the great convenience of carrying thousands of songs in your pocket.

CDs, though, are caught in the middle. They’re inconvenient compared to MP3s, and not so much better in fidelity to make you want to give up some of that convenience. So increasingly music fans choose not to buy CDs.

What are the main characteristics of fidelity and convenience that separate one from the other and why is striving for both a failed pursuit?

Kevin Maney: Fidelity is the experience of something – not just how good it is, but how it makes you feel or what it lends to your personal identity. Convenience is how easy it is to get something. So if a product or service is ubiquitous and cheap, it’s pretty convenient. Think Wal-Mart of McDonald’s.

Trying to be both just confuses people. It’s like Wal-Mart trying to sell luxury goods. High-end bag company Coach got into trouble when it started selling cheap bags in middle-American shopping malls.

Why is it that MP3s — removed from the packaging and art that previous generations associated with music — lose the sense of awe that we might have attached to the uniqueness of the song?  Why does digital music in general lack what cultural critic Walter Benjamin called aura?

Kevin Maney: Well, you hit on the head. There is little about owning an MP3 song that contributes to your identity. When you owned an album, the package – and the price you paid for it – gave you a greater investment in that music, and the physical package showed your friends that you invested in that music. It became a piece of who you are, so it carried greater fidelity. A single song buried on an iPod does almost none of that.

Given that the digital music market now is structured in terms of super-convenience, do you feel that an opportunity has opened up for anyone that can capture the high fidelity side of the trade-off?

Kevin Maney:  Live music is more popular than ever, and I think that’s a reason why – fans want to get a higher-fidelity experience with the acts they love. There’s also a niche boom in vinyl albums. Some people think the fidelity of vinyl is worth the inconvenience.

You seem to give quite a bit of credit to the idea that a collection of books on display can serve as identity markers — as a way that you could learn quite a bit about a person — but when it comes to music, you seem to think that live concerts exhibit more identity than the ownership of music, why is that?

Kevin Maney: When you go to a live concert, you buy the T-shirt, you tell your friends you went – in fact, it might be something you talk about 10 or 20 years later. It becomes part of your identity. That’s powerful.

How do you think Jim Collin’s Hedgehog Concept can be applied to the personal strategy of up-and-coming artists?

Kevin Maney: Collins’ concept says that you should find the one thing you do better than anyone else, and then do it consistently. That’s a way of saying: Figure out a role you can play in music that puts you at the high fidelity end. If you can be an average guitar player but a GREAT country mandolin player, you’d be better off doing the latter.

In the prologue you talk about Avatar and how the movie industry hopes 3D films can drive consumers back to theaters.

Knowing the success that Avatar had, did you gain confidence in the idea that consumers will be more attracted to the 3D experience or did Avatar set the bar so high that the onslaught of films coming out may fail to live up to the expectations that the marketplace now has?

Kevin Maney: I don’t believe 3D had all that much to do with Avatar’s success. But it’s certainly possible that 3D will come to be a common part of seeing movies, just like color in the 1950s.

Part of this problem stems from the notion that as humans we are naturally ungrateful creatures because of how easily we become habituated to new experiences…  How does this factor play into the fidelity swap and tech effect?

Kevin Maney: The bar is always being raised on fidelity and convenience. Movies are a good example – if we come to expect 3D movies, then 3D movies aren’t special anymore, and it ceases to be a reason you’d go see a movie. So moviemakers will have to come up with something else.