Interview: Jeff Gomez of Print Is Dead: Books in Our Digital Age (Pt. 1) 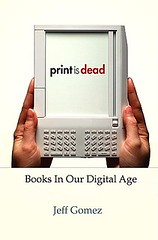 Recently, I spoke with Jeff Gomez, who is the author of Print Is Dead: Books in Our Digital Age and currently the director of online consumer sales and marketing for Penguin Group USA.  In this interview, Jeff shares his thoughts on the role of publishers in the digital age, the emergence of a middle class of authors, and the future of print.

In what ways has the digital age forced us to confront many of our ‘romantic notions’ about what it means to be an artist or author – both in terms of being aloof in the nature, solely involved in the creative processes, and typically dethatched from their audiences and businesses in general? 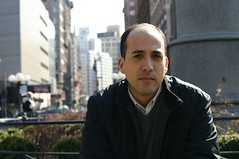 Jeff Gomez: Yes, it definitely forces us to confront the notion of the unconcerned or aloof artist, someone who writes in their garret and wonders about their relevance in the world. These days, the garret would have a webcam and the writer would have a blog; there’s instant feedback and, sometimes, instant recognition.

The bohemian lifestyle, in an age of Facebook and Twitter, looks very different than what Puccini portrayed in La Boheme (not to mention what Linklater portrayed in Slacker). On the other side of the spectrum, the successful writer can no longer ignore his or her audience and communicate only via the bon mots found in their novels. People want and expect their favorite writers, musicians, and filmmakers to keep a blog or to Twitter about their progress in terms of what they’re working on.

The layers of separation between artist and audience are now, no pun intended, paper-thin. Another romantic notion that we need to do away with is the way we read. Reading used to be considered a quiet, contemplative, and solo experience. And yet it’s increasingly being accompanied by an MP3 soundtrack, or it’s collaborative and communal. People may still sit in meadows or in bay windows, and quietly read a novel on their own, but as soon as they’re done they chat online about what they’ve just read and that connects them to people all over the world who are reading the same thing, and that’s a huge change in the idea; reading is, more than ever, a social experience.

With the emergence of eBooks and printing-on-demand there was suspected to be a power shift away from publishers that allowed authors to bypass the traditional channels and connect with their audiences directly – how has this scenario played out?  In what ways were pundits wrong / correct?

Jeff Gomez: The notion that, just because books can be easily produced by anyone, means publishers will whither away and die is both wrong and overblown. There have been vanity presses for years, companies that would allow you to publish your book and get it into the marketplace. And what that process showed was the exact opposite than what you’d expect; it showed how important publishers were, rather than how unimportant. Publishers act as both filter and megaphone; they’re trusted sources, and they carry with them great respect. “Publish” doesn’t mean merely the act of putting together a physical book. To be “published” means a reputable publisher, one with a name and a reputation and a catalog, is willing to take you on, endorse you, and present you to the world.

Much in the way that music industry pundits suspected that technological innovations would render major labels obsolete in the digital age, what are your arguments for why, contrary to popular sentiment, publishers will still in fact exist during these turbulent and revolutionary times as well?

Jeff Gomez: Another area where publishers come in handy is that they pay people. It’s one thing to have a million friends or plays on Myspace, but you can’t turn that into a living. Even people who got their start by being Web celebrities, such as Tila Tequila or Perez Hilton, have gone on to achieve mainstream success by making deals that include mainstream media: record deals, book deals, appearing on a TV show, etc. So even though you have something like Youtube, where you can become a viral sensation overnight by getting millions upon millions of hits, that doesn’t mean you can translate that into monetary success. However, where all of this technology comes in handy, for both writers and publishers (not to mention for readers) is in finding new talent. Many writers and books are being discovered through blogs but, again, what you see are blogs being turned into books and not the other way around.

Dan Pink outlines the three key components of the new “operating system” that supports creative work forces.  Autonomy – The urge to direct our own lives.  Mastery – The desire to get better and better at something that matters.  Purpose – The yearning to do something that we do in the service of something larger than ourselves.

Previously, the highest motivation of an author was to continue writing books so that one day they could become signed into a publishing deal, do you think that the “drive” of authors has increasingly shifted towards the operating system that Dan Pink recently conceived in his new book, why or why not?

Jeff Gomez: While I think there’s an awful lot of activity—online and offline—that can be ascribed to Pink’s thesis, I don’t think that the current model of authorial motivation is one of them. Most writers write in order to get published. A lot of that has to do with money, prestige, and platform, but the bottom line is that writers write in order to get read, and that leads them to publishers. People may start websites and blogs because of the reasons that Pink proposes, but when it comes to wanting to really gain an audience of readers (not to mention reviews and revenue), that’s where publishers come in very handy.

Pick up a copy of this amazing and highly insightful book at Amazon.  Read Part 2