As you’ve come to understand and encounter these drastically different listening habits that people have adopted, what are the mechanisms of creating music that need to evolve as a result of these changes?

Jay Frank:  The biggest thing that needs to evolve is the recognition of the environments themselves and then create music that fits within that.  Increasingly, revenues will come from streams rather than purchases.  With a purchase, the artist makes the same amount of money whether someone listens once or a million times.  With streams, listening once barely keeps the lights on, while millions of streams will make more money than you’d get from the purchase.  So the question moves from convincing someone to purchase to convincing someone to listen over and over.  With that, the experiential playlists will be that much more crucial in delivering those plays.  If you’re not on the playlists, you’re not earning money.

For each artist, those playlists will differ drastically.  But if one fails to recognize and think about what playlists they might end up on, they may find them fitting in a no-mans land.  Those will be the songs that fail to catch heat and fail to make money, no matter how much someone may perceive its quality.

Another phenomenon to arise out of the Internet is “song-surfing,” which is the result of people wanting Pandora to pick the songs they should to listen to rather than relying on themselves to choose something from the overwhelming amount of music available.  What this amounts to is listeners sitting at the computer as songs come by on the metaphorically ‘music conveyor belt.’

How have these new methods for discovering music brought about the need to change the ways that songs are structured and why is discovering songs from the beginning such a different experience for listeners compared to radio?

Jay Frank:  People have always wanted music to be an easy experience.  Radio works because you hit a button and music comes out.  Pandora and TheSixtyOne and many other playlist sites are equally as easy.  The difference is that the buttons on radio, whether it’s the on button or changing a station, usually brings you into a song at a random point in the song.  When you switch songs or stations on these sites, nearly all of them start their streaming at the beginning of the song.  This is a radically different experience compared to radio.  When placed at a random point in a song, there’s a decent chance you’ll end up at the chorus.  With this new paradigm, there is a 99% chance you’ll end up at the same point: the beginning of the song.

This is actually good news for the song creator.  You don’t have to worry about wondering what point of the song you need to impress someone.  You need to impress them at the beginning.  You add to that the ease it is to switch between songs and the short attention spans people have nowadays, and you also have to impress them quickly.  It’s why I strongly advocate little to no introductions in songs.  I love the idea of setting the mood of the song with an intro as much as the next guy.  But the reality of music discovery has largely made that obsolete if the musician is targeting success.

What happens under these circumstances, according to Psychologist Barry Schwartz, is that when choice gets overwhelming, it can turn ‘choosers’ into ‘pickers.’”  This distinction, he says, “is meant to capture differences in how active and engaged people are as they make their decisions.”

Seeing as the choices of music that people have to listen to will only continue to grow exponentially over time — both in terms of music being created now and what’s accessible in the past — how do you think these changes affect the level of engagement people have in the process of how they discover music?

Jay Frank:  I think it affects people greatly.  Barry’s book, The Paradox Of Choice, was a huge influence on Futurehit.DNA.  I read it as I was putting together my book’s hypotheses and found it made so much sense.  The issue music creators have is that they are naturally “choosers” and presume that all people who listen to music are like that.  The reality is that most people want to be entertained by music and not have to work for it.  With that, they are naturally prone to be “pickers”.  So a big issue current artists fail to grapple with is that they look at the internet and see so many active experiences that they presume everyone will act in that fashion.

A common mistake I see is long intros in music videos that set up a story of some sort.  The artist presumes that since TV is no longer required to see a video that a fan will be up for seeing any artistic expression the artist puts out.  But videos are first and foremost commercials for the artist’s music.  And only the hardcore fan will sit thru anything.  Time and time again, most people will not get engaged with these long intros and they don’t come back to give it a second try.  This usually means more than half of the people who would be willing to try to experience an artists’ long video don’t even hear a note of music, defeating the purpose behind the video.

How an artist combats this is varied.  One way is to structure the song so that a passive person is forced to become active.  Another is to make it so passive that it blends in seamlessly with the experience.  The former tends to lead towards higher purchase volume.  The latter tends to lead towards higher streaming revenue.  Right now the purchase volume is the higher dollar figure, but that is apt to change in the future.

In conclusion, what are the remaining steps that artists should consider taking if their goal is to create music that’s more commercially viable, more adapt to the ways in which technology as drastically changed how people discover and listen to music in the digital age?

Jay Frank: Focus on how you get someone to listen to your music more than once.  First impressions used to be hard to obtain because gatekeepers prevented the audience from hearing them.  Now, with streaming so easy, those impressions are a dime a dozen.  But the songs that engage in commerce and become the ones people talk about years from now require multiple impressions. 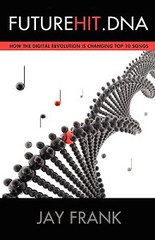 And you only get one shot at that first impression.

So if you have a long intro and they bail early, you may never get them back.  Impress them early.  Give the listener reasons to hear it again.  Alternate versions, multiple videos, anything that gets them to listen a second time.  An old industry paradigm was to tell people they just had to listen to a song a few times to “get it”.  You can’t expect the audience to do that.  They have too many distractions. Chances are this means subtlety is out the window and you must do whatever you can to snag that listener and get them to hit the play button at least twice.

And, of course, the next step should be to read Futurehit.DNA (free excerpt of book available at link) cover to cover and put it into practice.  (Read Part 1)