For Fans, By Fans: A Crowd-Sourced Radiohead Film 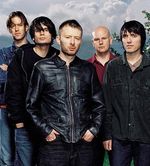 I’ve finally gotten the chance to read Clay Shirky’s previous book Here Comes Everybody; this fan initiative struck me as right up that alley. Last summer, 62 fans attended a Radiohead show in Prague and filmed the concert using various handheld devices. They pooled their footage together and edited it together into this two-hour film of the show. The catch is that Radiohead went as far as giving the fans their high-quality audio recordings of the concert to soundtrack it.

As the homepage for the project sums up the film, it is “by the fans for the fans, please share and enjoy.” I think this is a perfect example of fans organizing without organizations and becoming empowered by social and digital technologies.  All of this, wouldn’t have been possible not too long ago and it will be interesting to see more films like this emerge in the years to come.

A Wolf at the Door:

True Love Waits / Everything In Its Right Place: