FlowSongs: Why Paying Royalties Is "Complicated"

The concept behind the new Pure owned, cloud-based music service FlowSongs is pretty straightforward. You hear a song on the radio and want to buy it, but have to wait until next time your logged onto iTunes or maybe in a store. The company hopes to amend this disparity by allowing users to purchase songs off the radio immediately—if they wish. This is where things get a little tricky though, because once the music is bought...

How do you determine who gets paid?

At the launch of FlowMusic, CEO Hossein Yassaie shared this slide below, in an attempt to show the kind of outright insanity he had to deconstruct in order to pay out royalties to the various parties involved. Reportedly, “this one slide took three hours to be explained to him.” One commenter lamented that, "a picture of a bowl spaghetti would have made more sense than the slide." I have to say that I agree. 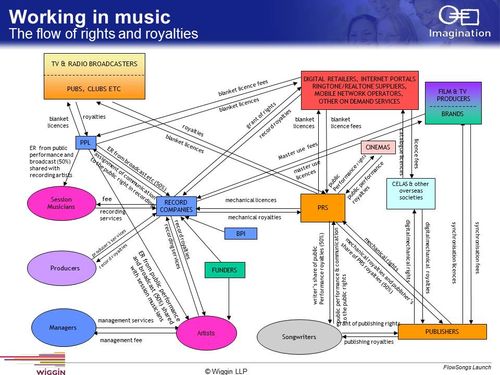