In January, Dropcards unveiled their new download card platform.  Then, late last week, they held a short webinar to take people through a tour of the new features they added.  I was in attendance, and while I was not familiar with the inner workings of their previous site, I became quite impressed with their rather neat and current offerings.

It goes without saying, that for any artist, the detailed redemption reporting and interactive graphs that the staff over at Dropcards has added to their site, will prove to be extremely useful.  As they will help artists keep all of their offline marketing efforts focused and data-driven.  Plus, they also have this really cool redemption map powered by Google, wherein each user who redeems their media is pinpointed according to their actual location.  Giving artists even more insight into potential tour routes and where their fans cluster across the globe.

Another source talks about the potential for selling Dropcards instead of CDs at merch booths, which — while it is something that I’ve never encountered — I’m sure isn’t a exactly a new idea to many of you.  What’s good about Dropcards is that — when redeemed — you can chose whether or not to collect emails from those who do so.  Thus, widening your contacts for your direct-to-fan campaigns, where you could then establish a connection and make a unique proposition to your new contacts, whom, hopefully become new fans as well.

Have any of you used Dropcards and what are your thoughts?

(See below for image.) 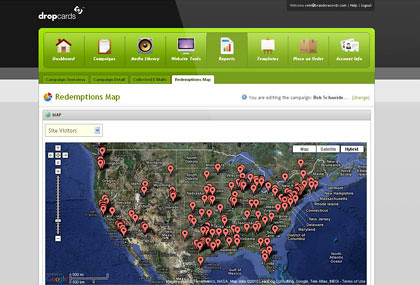