Are Artists More Pressured To Conform? 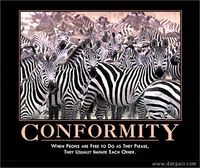 As the age of radical transparency dawns and the conversations between artists and their audience are opened up, it made me wonder if the biggest pressure on artists is really choosing to conform to popular music trends, in hopes of gaining traction, or staying true to their art. I asked the readers for their opinions on this issue and here is some of the feedback that they gave.

Old Record Guy said, “If you want to have mainstream success, then some element of conformity is almost always required, and that just doesn't apply to music.” In his mind, it comes down to a matter of choice, whether the artist wants to be Katy Perry or Sonic Youth. In their signing to Geffen, the group “made videos that got aired on MTV and they simplified.” Sonic Youth did so, without alienating their fans or losing creditability; they made more money too.

Ethan Stanislawski argued that it’s not necessary a matter of conforming to commercial trends these days, as much as it is pandering to a new set of gatekeepers: the bloggers. If an artist has a hope in hell of getting their music out there, it doesn’t hurt if there’s a slant towards Pavement or Animal Collective.

This type of playing the game, he asserts, will get artist more praise on certain blogs and drive fans towards buying their music. Indie creditability has become its own commodity. No artist is sacrificing a song or two to sound like Train or Nickelback—that’s not a bridge capable of being made—but if they can shape their music to appeal to the snobs and hipsters, there’s reason to have faith.

Hisham Dahud thinks that with all of the media outlets to discover music that tastes have widened immensely, and that, while the commercial sphere may be focusing on several genres and trends, the web is shining a spotlight on thousands. "If an artist truly is an artist by nature, then they'll make the music that their soul intended and requires them create," he says. "And with an effective marketing strategy, real quality music will always rise to the top."

Brian at the music discovery site Fuzzedout shared the same viewpoint. He thinks that Devotchka, Gogol Bordello, and Coheed and Cambria are great examples of artists that “make good livings touring but get absolutely little to no radio support.” These acts make non-mainstream music and have “carved out niches for their sound that fans love.” Thus, depending at what point an artist is in their career, they aren’t as pressured to conform, due the sheer diversity of music communities online, more niche markets have opened up—that would’ve been previously inaccessible, not to mention unsustainable.

According to Yannick, the GeneralEclectic, “Popular music has always followed trends to some extent. If the question is to stay true to yourself or follow a trend, there is always the option to try doing both at the same time. And a lot of the really big artists have succeeded at that.”

To which he cites the Rolling Stones doing Funk and U2 doing Electronica as examples. In this instance, Yannick argues that the artists stayed true to their art and incorporated the reining popular trend into their own—a move that speaks more of innovation than of selling out. When an artist is under the pressure to produce hits is when blatant of copying occurs.

If the artist has completed their album and management doesn’t hear the single, then it’s back to the drawing board, and likely, to the moment where they decide to survey what’s catching on at the moment and give the label what they want. It may be that they don’t believe in the music, but that doesn’t matter. In the old days, Yannick contends that labels helped artists in determining whether their songs worked or not. The financial pressure often resulted in music that strayed from the artist’s plans for their album. The difference in the DIY movement, he says, is that “the artist has to make all artistic and commercial decisions by themselves and the financial requirements concern their own pocket.”

In the traditional record industry, an artist had to answer to their label. Today, they have to answer to their fans. In my opinion, the most pressure to conform these days comes from fans. Do you give fans what they want or say screw ‘em? Since you’re the artist, you know what’s best, but do you always?